skip to main | skip to sidebar

In just a few short years... 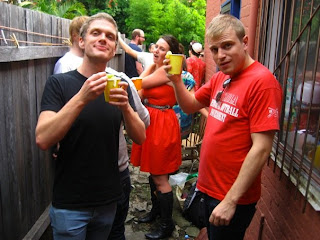 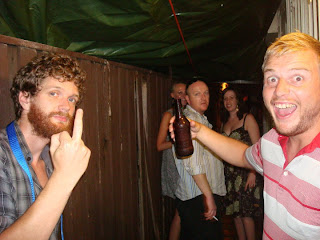 I'm happier/fatter; you're hairier/tougher.
Posted by Peach at 5:00 PM 7 comments:

Cool lawyers prove they're cool by DOING A SURVEY ABOUT WHICH BRAND NAMES MAKE FOR THE MOST POPULAR TATTOOS.

The results are horrifying.

Shag! This is the show we're doing! 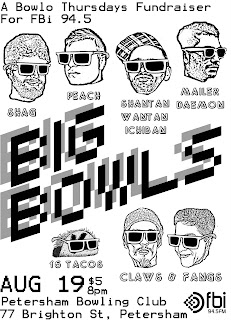 Yeah, it's going to rule. It'll be a Bowlo Thursdays rap show in Petersham, Sydney. Remember it's a fundraiser for FBI 94.5, the premier community radio station in Sydney. There'll be Shag, Shantan Wantan Ichiban, 16Tacos/Jon Valenzuela/Tilted Page, Jozz Scott and Max Gosford from Claws and Fangs, and Peach playing songs from his Beef and Tripe Mixtape (with possibly a few new ones from his Off the Grid mixtape).

Is that how "googleability" works? Did I hit enough buzzwords?
Posted by Peach at 9:15 AM 7 comments:

Re-posting stuff from other more popular blogs is not kosher I know, but this is fairly solid.

All music genres go through a very similar life cycle: birth, growth, mainstream acceptance, decline, and finally obscurity. With black music, however, the final stage is never reached because white people are work tirelessly to keep it alive. Apparently, once a music has lost its relevance with its intended audience, it becomes MORE relevant to white people.

Historically speaking, the music that white people have kept on life support for the longest period of time is Jazz. Thanks largely to public radio, bookstores, and coffee shops, Jazz has carved out a niche in white culture that is not yet ready to be replaced by Indie Rock. But the biggest role that Jazz plays in white culture is in the white fantasy of leisure. All white people believe that they prefer listening to jazz over watching television. This is not true.

Every few a months, a white person will put on some Jazz and pour themselves a glass of wine or scotch and tell themselves how nice it is. Then they will get bored and watch television or write emails to other white people about how nice it was to listen to Jazz at home. “Last night, I poured myself a glass of Shiraz and put Charlie Parker on the Bose. It was so relaxing, I wish I had a fireplace.” Listing this activity as one of your favorites is a sure fire way to make progress towards a romantic relationship with a white person.

Along with Jazz, white people have also taken quite a shine to The Blues, an art form that captured the pain of the black experience in America. Then, in the 1960s, a bunch of British bands started to play their own version of the music and white people have been loving it ever since. It makes sense considering that the British were the ones who created The Blues in the 17th Century.

Today, white people keep The Blues going strong by taking vacations to Memphis, forming awkward bands, making documentaries, and organizing folk festivals. Blue and Jazz music appeal mostly to older white people and select few young ones who probably wear fedoras. But that doesn’t mean that young white people aren’t working hard to preserve music that has lost relevance. No, there are literally thousands of white people who are giving their all to keep old school Hip Hop alive.

Even as you read this, white people are telling other white people about the golden age of Hip Hop that they experienced in a suburban high school or through a viewing of The Wackness.

If you are good at concealing laughter and contempt, you should ask a white person about “Real Hip Hop.” They will quickly tell you about how they don’t listen to “Commercial Hip Hop” (aka music that black people actually enjoy), and that they much prefer “Classic Hip Hop.”

Calling this style of music ‘old school’ is considered an especially apt name since the majority of people who listen to it did so while attending old schools such as Dartmouth, Bard, and Williams College.

What it all comes down to is that white people are convinced that if they were alive when this music was relevant that they would have been into it. They would have been Alan Lomax or Rick Rubin. Now the best they can hope for is to impress an older black person with their knowledge.
Posted by Peach at 8:13 AM 3 comments:

Dialect and Despair - Prolific from Daniel Principe on Vimeo.

I swear we like more than two links (we do)